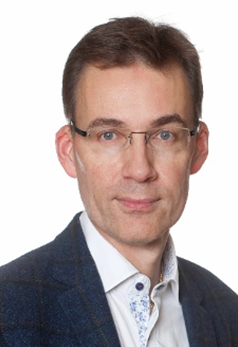 Professor and Chair of Department of Molecular and Clinical Medicine

Jan Borén is Professor and Chair of Department of Molecular and Clinical Medicine at Institute of Medicine, Sahlgrenska Academy at University of Gothenburg, and physician at the Department of Clinical Chemistry at the Sahlgrenska University Hospital. He obtained his medical degree at the University of Gothenburg, where he also completed his PhD. His main long-term interest lipid metabolism and he has focused to understand the underlying mechanisms that lead to, and consequences of lipid accumulation in the liver, arterial wall and heart, with the goal of translating this knowledge into effective treatment.

His research program is translational and involves both in vitro and in vivo studies including pathophysiological studies and mouse models, and kinetic studies in carefully phenotyped human volunteers. He is a member of Royal Society of Arts and Sciences in Gothenburg, and has awarded numerous honours including the Göran Gustafsson’s Prize in Medicine from the Royal Academy of Sciences, Dr. Eric K Fernström Foundation’s Research Award, and Irvine H. Page Atherosclerosis Research Award. He serves as Vice-President of the European Atherosclerosis Society (EAS), and is Editorial Board Member for Arteriosclerosis, Thrombosis, and Vascular Biology, Section editor for BBA – Molecular and Cell Biology of Lipids and co-Editor of Atherosclerosis.

CAUSES AND CONSEQUENCES OF CARDIOMETABOLIC DISEASES
Obesity is a well-known risk factor for the development of type 2 diabetes (T2D) and cardiovascular disease (CVD). Importantly, obesity is not only associated with lipid accumulation in adipose tissue, but also in non-adipose tissues. This ectopic lipid accumulation is now recognized as an important link between obesity and its comorbidities. It is not clear how ectopic lipid accumulation induces cellular dysfunction, but elucidation of the underlying mechanisms is important to identify novel therapeutic targets. The overall aim for our research group is to understand the underlying mechanisms that lead to, and consequences of, lipid accumulation in the liver, arterial wall and heart, with the goal of translating this knowledge into effective diagnosis, prevention and treatment.

Fatty liver is linked to increased CVD morbidity and mortality
Non-alcoholic fatty liver disease (NAFLD) is defined as hepatic fat accumulation that exceeds 5% of liver weight in individuals who do not consume significant amounts of alcohol. In the past 2–3 decades, we have seen a marked increase in NAFLD, and it is now the most common cause of chronic liver disease in western countries. Approximately 25–30% of adults have NAFLD, and its prevalence increases to 70–90% among adults with obesity or type 2 diabetes. Although NAFLD may progress to severe liver diseases the most common cause of death in patients with NAFLD is CVD. This is – at least partly – explained by the fact that NAFLD associates with an atherogenic dyslipidemia characterized by increased triglycerides, low high-density lipoproteins (HDL), accumulation of small dense low-density lipoproteins (LDL) and postprandial hyperlipidemia (i.e., increased blood lipids following a meal). Our laboratory has made significant contributions to the current understanding of this harmful dyslipidemia. Specifically, we have shown that: (1) the different components of the dyslipidemia are metabolically linked; (2) a central pathophysiological feature is hepatic fat accumulation, which induces hepatic overproduction of large triglyceride-rich very low-density lipoprotein (VLDL1); (3) the impaired removal of triglyceride-rich lipoproteins (TRLs) induces postprandial hyperlipidemia and accumulation of atherogenic TRL remnants; (4) the impaired removal of TRLs associates with increased plasma concentration of apoC-III (Figure 1); and (5) insulin fails to suppress VLDL1 secretion in subjects with high liver fat.